How often have you stopped for a rest on one of the low stone retaining walls at Blackbutt Reserve? Chances are, you’re sitting on the remains of the early headstones from Newcastle’s first European burial ground at Christ Church Cathedral.

The burial ground at Christ Church Cathedral was first used possibly as early as 1801. The Old Burial Ground eventually contained over 3,300 burials before the last burials took place there in 1884.

In 1966, the Christ Church Cathedral, Newcastle, Cemetery Act allowed for the use of the former cemetery as a public park with responsibility for the park being given to Newcastle City Council.

No human remains were removed from Cathedral Park, and indeed there were by that time less than 300 headstones remain, most illegible or broken. Other grave markers, being made of timber, had deteriorated years before.

Under the terms of the Act, Council was required to compile an index plan and register of the names of people buried on the site as well as any other information that could be obtained about them.

From the act, “Council shall … remove all headstones without legible inscriptions thereon and other surface structures from the said lands and dispose of them in a manner agreed upon by the Council and Corporate Trustees.” Other headstones were to be preserved in their existing positions or to be removed and preserved in a new location, which is why in 2012 we see them along the eastern boundary.

Sarah Cameron, former Newcastle City Council heritage strategist, “The pieces of headstones and grave markers that were broken or illegible were transferred to other parts of the city to be used as either road base, garden edging or retaining walls – that sort of thing – and a number of them went to Blackbutt.”

So now, that low retaining wall you may have sat on or the kids walked along … will have more of a story for you. 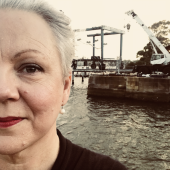