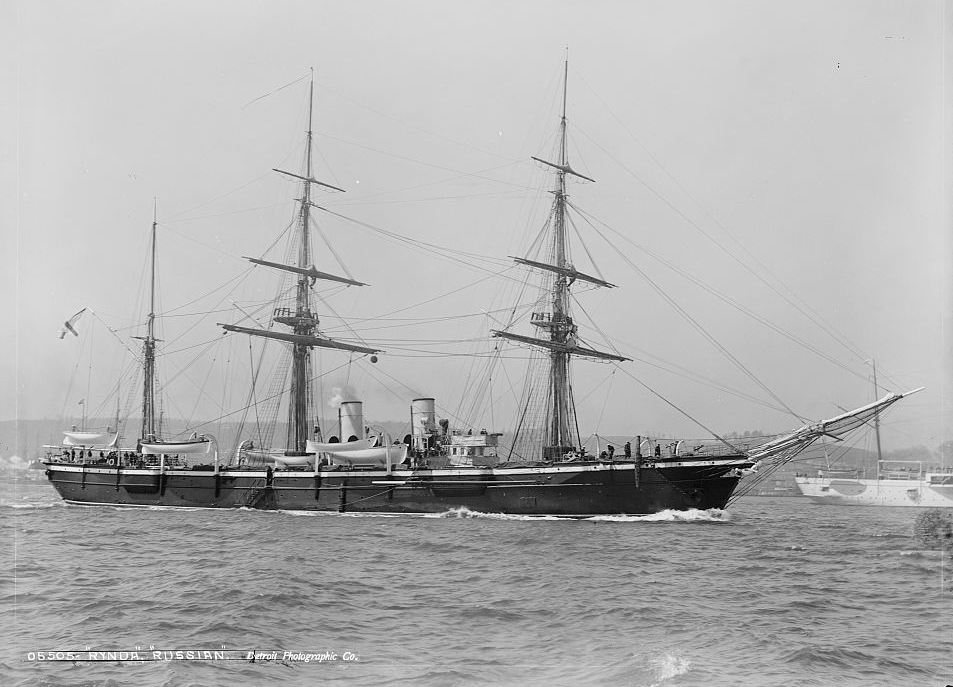 Newcastle may once have been concerned that the Russians were coming â€¦ but this news article from 1888 details the visit of HIRMS Rynda â€“ a Russian warship that came in to the port of Newcastle to take on coal. 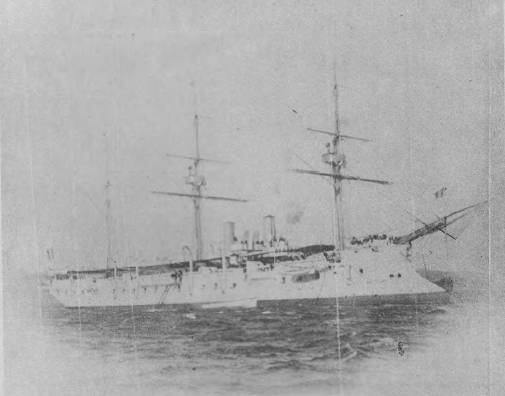 More than usual excitement was manifested in Newcastle yesterday afternoon, about 4.30 oâ€™clock, when the signal of a man-of-war was run up at Fortification Hill, and people wondered what armed vessel the stranger could possibly be, as she hailed from the northward, and many were of opinion that she was an addition to the Australian squadron.

The German ensign was hoisted at the Signal hill, the officials evidently being under the impression that this was her nationality, but as she entered the port, about half-past five, it was seen that the stranger was a Russian man-of-war, and her name turned out to be theÂ Rynda.Â The stranger signalled for a pilot, and Pilot Melville proceeded off to her, and piloted her safely to No. 5 horseshoe buoy, where she was moored.

HIRM ShipÂ RyndaÂ is a steam corvette, carrying twenty-three guns, ten large forty-pounders and thirteen of small calibre, and has come on here for the purpose of replenishing her bunkers, which are rather empty, although a quantity of coal was taken in at Port Moresby (New Guinea), where the vessel called. TheÂ RyndaÂ is the first Russian warship that has ever visited Newcastle.

The RyndaÂ is certainly not a very formidable looking vessel externally; in fact she has more the appearance of a pleasure yacht; still, for all that, she is said to be a first-class weapon of war, and one that would prove a formidable rival in the event of her services being called into requisition, as the best of material has been used in her construction, whilst she has been built on the most improved principles, as far as purposes of defence are concerned.

Dr Morgan, health-officer, proceeded onboard, and after inspecting the stranger, granted her pratique, as there was no sickness onboard. Captain H. Newton, Harbourmaster, visited the RyndaÂ in his Government steam launch, and waited upon Captain Avellan, proffering him his services and officially welcoming him to the port. The shipÂ Lancaster Castle, which is lying in the Horseshoe, saluted the stranger by dipping her flag, and the compliment was immediately responded to.

TheÂ RyndaÂ is almost a brand-new vessel, only having seen two years service. She was built in St. Petersburg, in 1885, and has a net register of 1,800 tons and a gross measurement of 3,000 tons. Her dimensions are: Length 365 ft; beam 42 ft; and depth 18Â½ feet. The engines are of the most modern construction, of 3,000 horsepower, and are capable of maintaining a speed of 16 knots per hour on a moderate consumption of coal.

TheÂ RyndaÂ is barque rigged, and is said to be able to sail 14 knots per hour under canvas. Her guns are of Obonhoff cast-steel. TheÂ RyndaÂ has an elliptical stem and straight stern.

The arrival of theÂ RyndaÂ can certainly be considered otherwise than an important event, from the fact of there being onboard the cousin of the Czar of Russia, the Grand Duke Alexander Michaelovich, son of Princess Olga, who holds the position of Lieutenant. His Imperial Highness is a wellbuilt young fellow, twenty-two years of age, exceedingly good-looking and of dark complexion. He stands about five feet ten inches in height. The Grand Duke speaks English sufficiently well to converse in that language, and is of a most unassuming and quiet demeanour.

There are also, as mentioned previously, several Russian Princes and Counts, acting in the capacity of officers. TheÂ RyndaÂ is fitted up in splendid style, and her saloon is an elaborate apartment, under the poop. The officers and crew are comfortably quartered in various portions of the vessel, and the most rigid discipline is observed.

There is a brass band, consisting of twenty performers, and shortly after the vessel moored they struck up several favourite Russian selections, which were listened to with rapt attention by hundreds of persons on shore, great precision being observable. Simultaneously with the band striking up, a band onboard a small steamer, which had been up the river on an excursion, passed under the stern of theÂ RyndaÂ playing the â€˜National Anthemâ€™, which was succeeded by â€˜Rule Britanniaâ€™, and â€˜Auld Lang Syneâ€™, and those onboard the warship listened to the music with great interest.

TheÂ Rynda is from Vladivostock, via Yokohama, Japan, Hongkong, Manila, the Dutch Island of Amboine, and New Guinea. She left Vladivostok three months and a half since, and is on a pleasure visit more than anything else. At Port Moresby, she remained four days, and the officers and crew had a chance of going on shore, where they inspected the place with a great amount of interest, and saw large numbers of New Guinea natives, who were very quiet and did not seem to think much of Ryndaâ€™s arrival there, probably because so many men-of-war have visited New Guinea.

TheÂ RyndaÂ left Port Moresby eleven days ago, and had a fine weather passage throughout; in fact, nearly the whole voyage since leaving Vladivostock has been characterised by fine weather, the vessel making use of both steam and sail. The Commissioner of New Guinea, Mr. Rowley, treated those onboard theÂ RyndaÂ with the utmost courtesy.

TheÂ RyndaÂ will take in about 300 tons of coal here, which will be shipped onboard from lighters, and she will probably remain here until Monday or Tuesday next, when she will leave for Sydney, where she is to remain some time, proceeding thence to Melbourne, and then back to Vladivostock, probably via New Zealand.

His Imperial Highness the Grand Duke will most likely be the guest of Lord Carrington during theÂ Ryndaâ€™sÂ stay in Sydney waters. He is now on his first voyage in theÂ Rynda, but has seen service in several other Russian men-of-war. Every morning it is the custom of the band to play the Russian National Anthem, whilst at evening during prayers, the band discourses the March of the Emperor Nicholas I.

TheÂ RyndaÂ is provided with two steam launches and ten ordinary boats. She is fitted up throughout with the electric light, and there are 150 burners for this purpose, whilst oil is also used.

In consequence of the uncertain state of the diplomatic relations existing between the various European Powers at the present time, and the many statements that war is imminent, many timid people ran away with the idea that theÂ RyndaÂ had come here with some wicked design to blow us all up, but their fears were soon allayed in this respect.

Large numbers of craft put off yesterday evening to take stock of the stranger. The RyndaÂ is not on a very heavy draught, only drawing 18Â½ ft aft, and 15 ft forward, so that she was able to cross the bar in perfect safety.