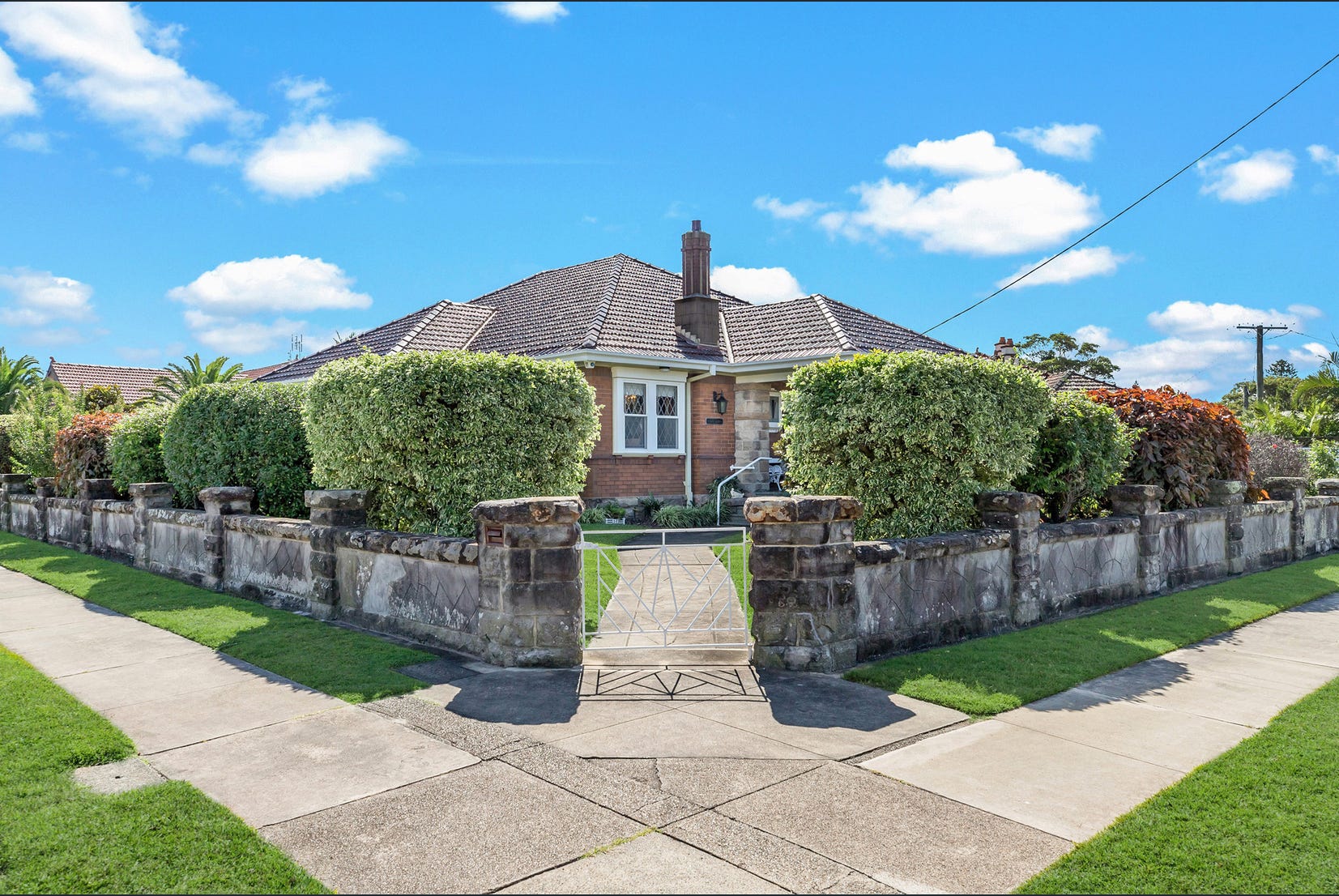 Hamilton’s Palo Alto is a piece of Art Deco bliss built for Mr William Herbert of Silsoe Street, Hamilton, in 1935. On the market for the first time since 1961, the building is a pure Art Deco time capsule.

This 1935 description of the Herbert’s new home paints quite a picture of luxury and the use of advanced finishes often used in theatres. Unsurprising given William Herbert’s many years of operating theatres in Australia. Having emigrated from the US, Herbert’s first theatres travelled Australia showing silent movies until he settled in Newcastle in 1907.

William Herbert died in Newcastle in 1947 at the age of 80.Â

The new residence just completed at a cost of Â£2800 for Mr. W. Herbert, an interior illustration of which appears on this page, is situated on a corner position in the Garden Suburb, with a frontage of 130ft. to Kemp-street and 90ft. to Silsoe-street, Hamilton. During the erection period this building attracted numerous visitors, whose interest was centred on some of its novel features, showing that it has been the designer’s desire to originate rather than imitate. 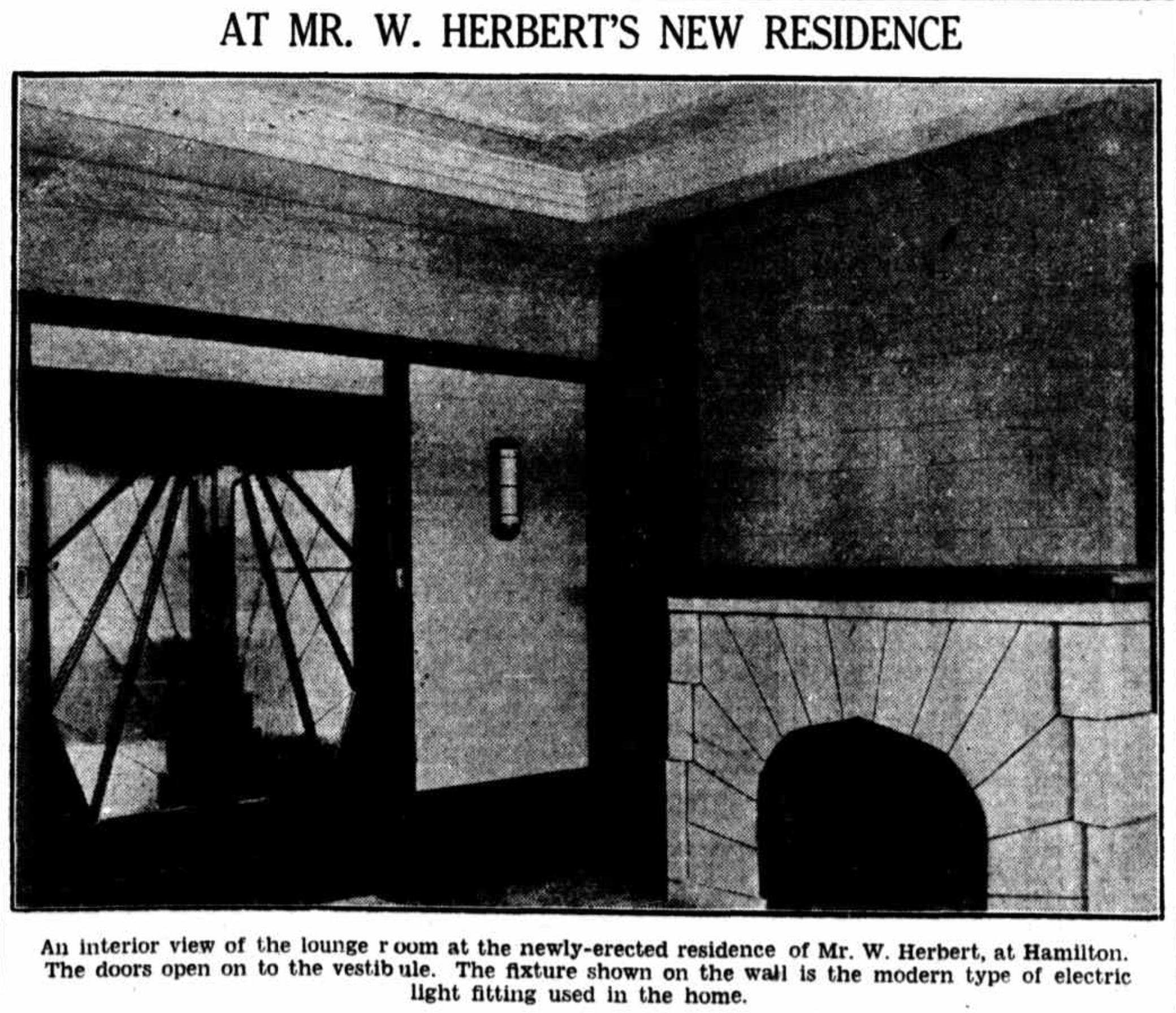 An interior view of the lounge room at the newly-erected residence of Mr. W. Herbert, at Hamilton. The doors open on to the vestibule. The fixture shown on the wall is the modern, type of electric light fitting used In the home. Image: Newcastle Morning Herald & Miners’ Advocate, 9 March 1935.

The exterior of the building presents a restful yet commanding appearance, with spacious entrance loggia and front verandah enclosed by massive stone piers and stone balustrading. These form a pleasing contrast to the chocolate coloured bricks as a background, and the dark tiled roof, with large overhanging eaves and nicely proportioned roof lines. A special feature is the introduction of Gosford white stone, which was brought from the quarries in large slabs and worked up into building blocks on the site. The entrance loggia, 14ft. by 11ft., and the front verandah, 19ft. by lift., are built entirely in rustic stonework, set with inverted black joints. The foundation around the building and the bay window bases are also built of stone. The stone fence built out to both frontages is a striking example of stonework treatment, and, with the distinctive iron gates, enhances the quality of the home. 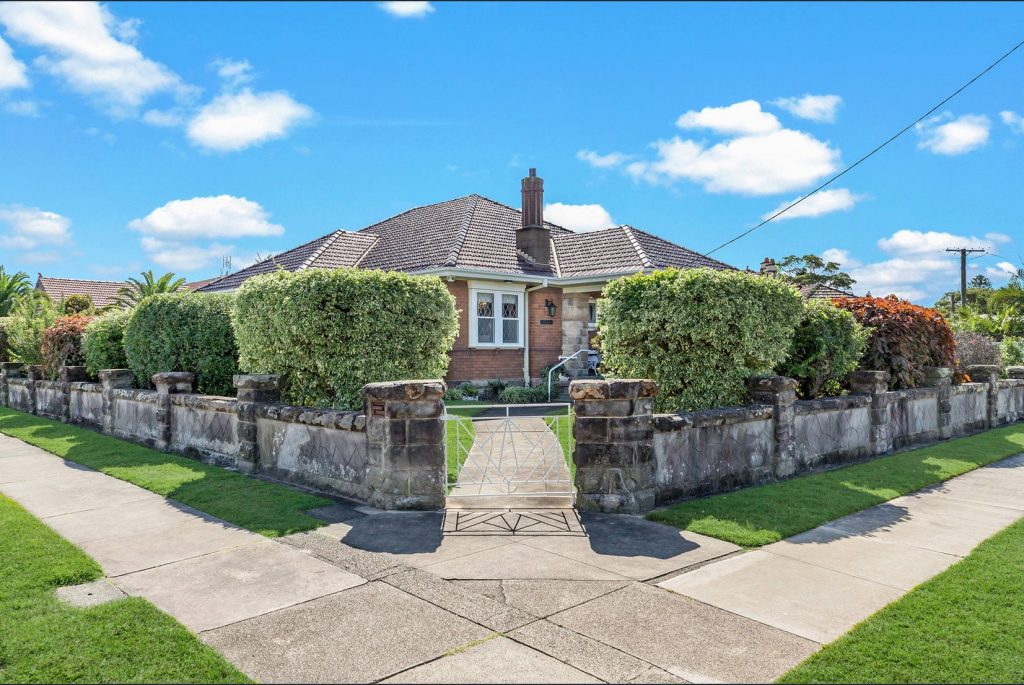 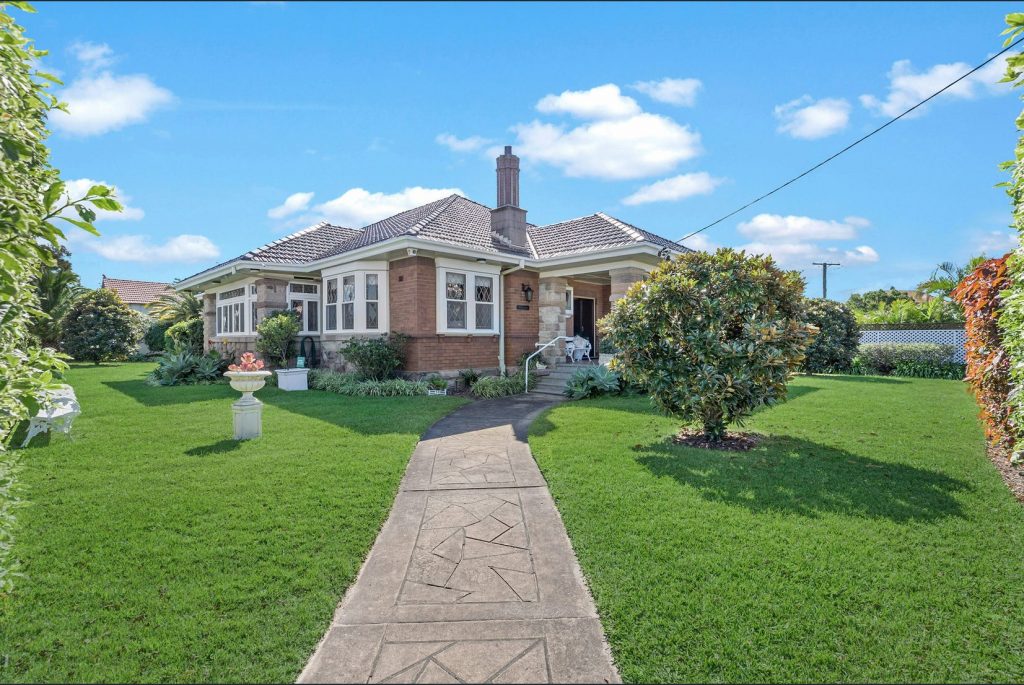 The layout of the house is unique with straightforward and convenient access to any room, yet lending itself to good separation of the different functions of the house. Sleeping quarters are completely isolated from the living portion a pair of glass swing doors, hung midway down the hall.

On entering the vestibule from the tiled loggia, one is struck by the soft textured walls, which are decorated on acoustic boarding in an ashbar pattern suggestive of a stonework interior. The 5ft. wide hall is of similar treatment to the vestibule, with built-in cloak cupboards on either side, equipped with hat racks, and enclosed with maple sliding doors. From the vestibule a pair of sliding glass doors of a distinctive futuristic design open into the lounge room. This room is 18ft. by 16ft., with a large bay window, stucco dome ceiling, white stone fireplace, and built-in bookcase; the soft textured walls are set in panels, of a tiled pattern celotex framed in maple mouldings. 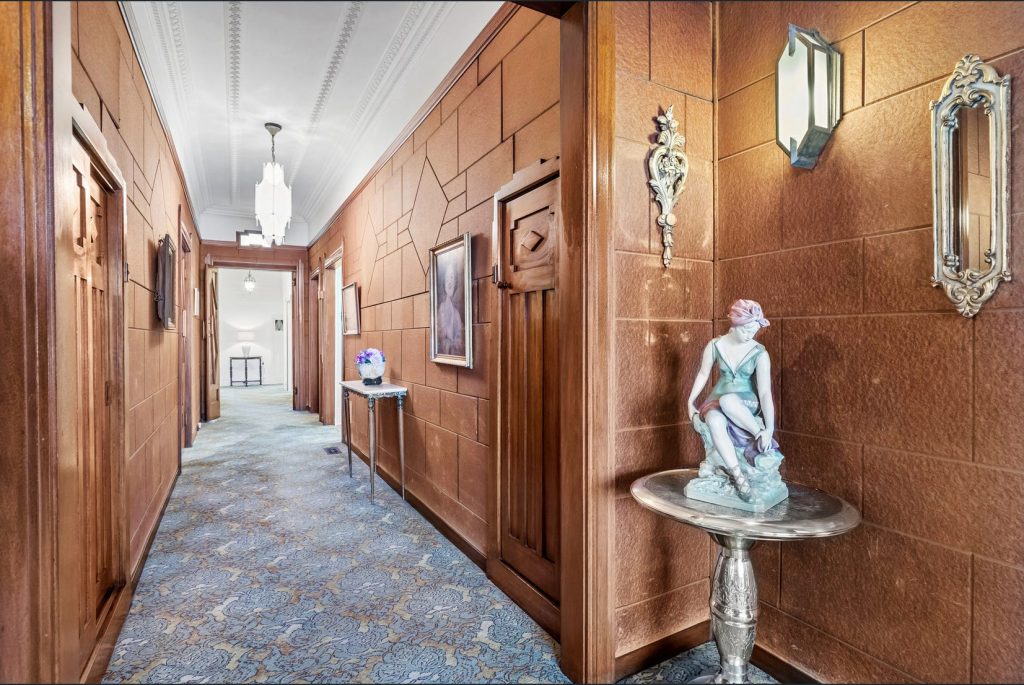 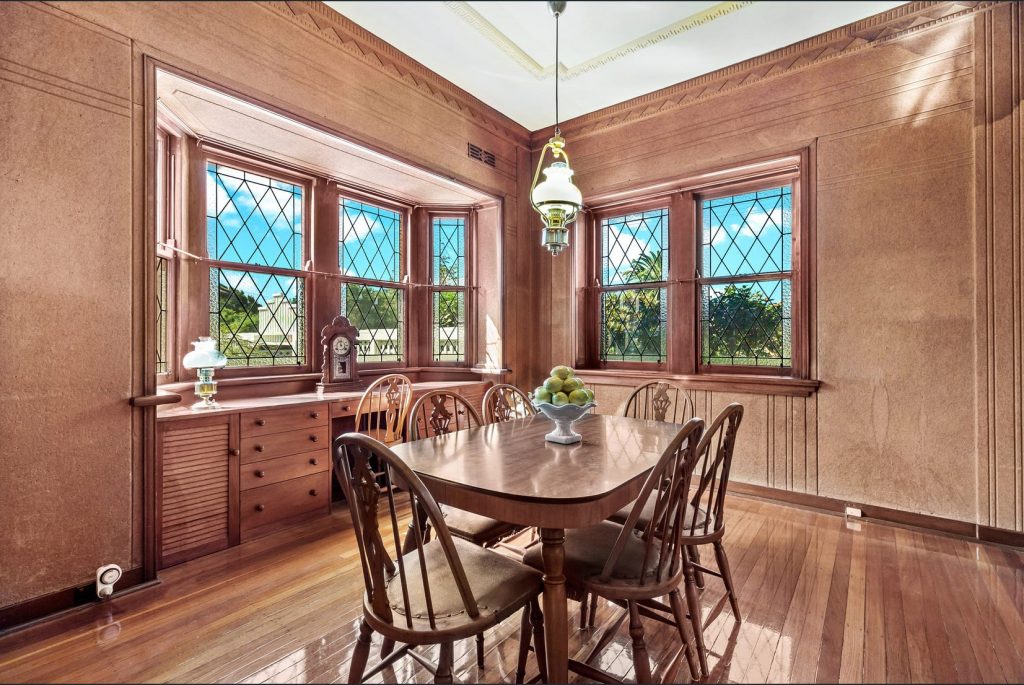 The dining room, 19ft. by 15ft., is connected to the lounge room by a pair of large sliding glass doors, which, when open, together with the double verandah doors, will form a large area for entertainment purposes. This room, finished in an ivory tint, forms a pleasing background to the Tudor arch fireplace, with stepped mantel shelves diminishing to built-in maple china cabinets on each side. 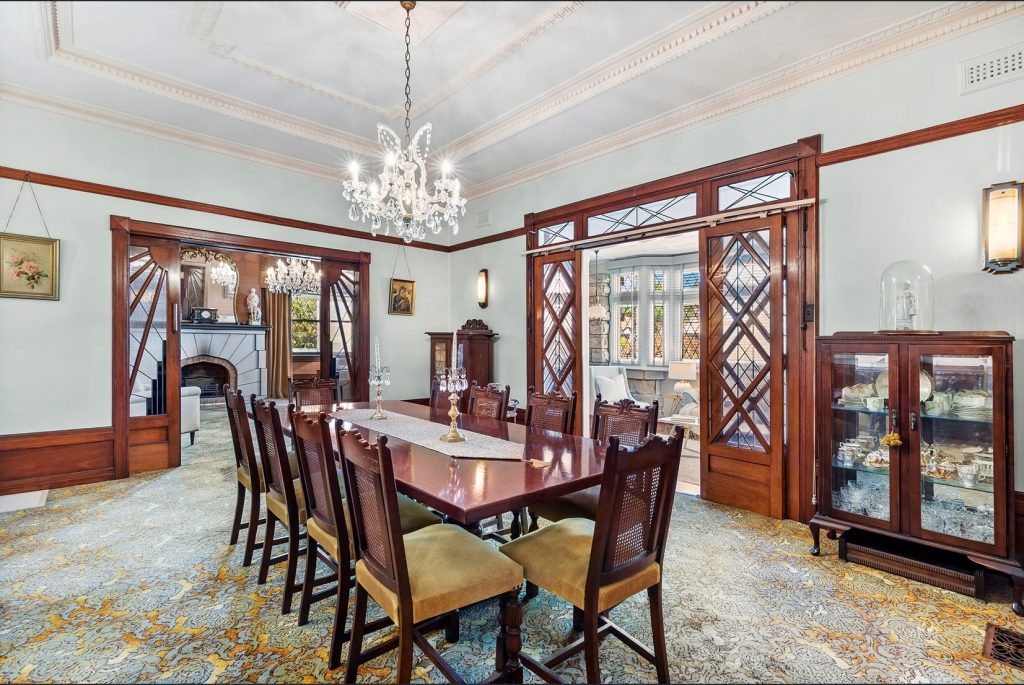 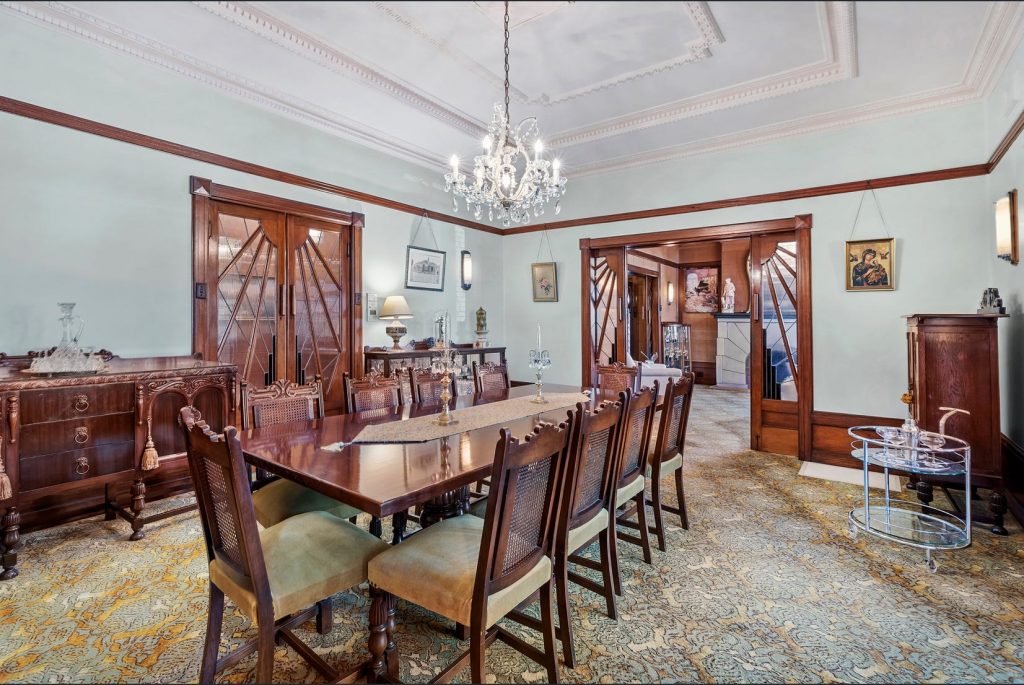 The four large bedrooms and the bathroom are grouped in the western portion of the house, each being equipped with spacious built-in wardrobes fitted with bevelled plate glass mirrors. In the lobby central to this group of rooms a large double built-in linen press is erected, with suitcase cupboards overhead, and with medicine and electric cleaner cabinets. The decorating scheme of this portion of the house shows artistic forethought and originality, being a departure from any standard practice. The walls, which are stepped, in keeping with the modern desire for horizontal lines, are brought down in soft delicate tints of greens, blues, and creams, with gold lines cut in on the steppings, the colour, of course, being varied in each room in accordance with its location. The doors, windows, architraves, and skirtings are flat finished in delicate two-tone greens or blues, with the mouldings brought out in gold. 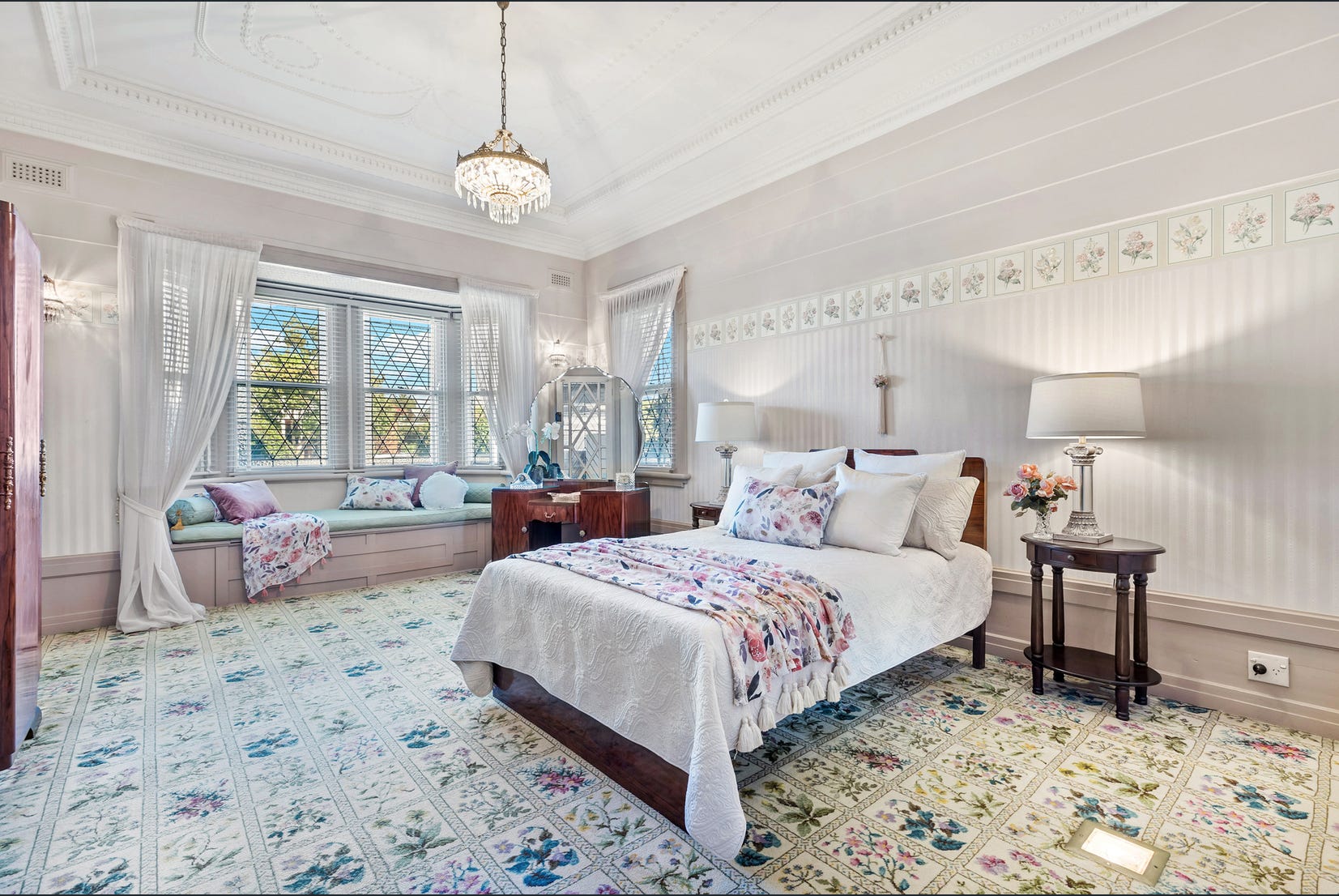 The bathroom, situated centrally in the bedroom group, is modern and spacious in design. Special attention has been paid to the window scheme in order to provide correct lighting and ventilation. A double light bay window has been introduced, throwing natural light on each side of the person in front of the built-in shaving cabinet mirror. The built-in Roman type bath is set back in a tiled alcove on a raised black tiled platform, the ceiling of which encloses the shower in a chrome-plated panel. Hot water is supplied to bath shower, bath and basin, from an automatic electric beater installed above the ceiling. The walls are oyster coloured mottled tile, treated with black and orange tiles, and finished above in ivory tints to the domed ceiling. The floor is finished in terrazo, with margins and centre set out on brass inlay. 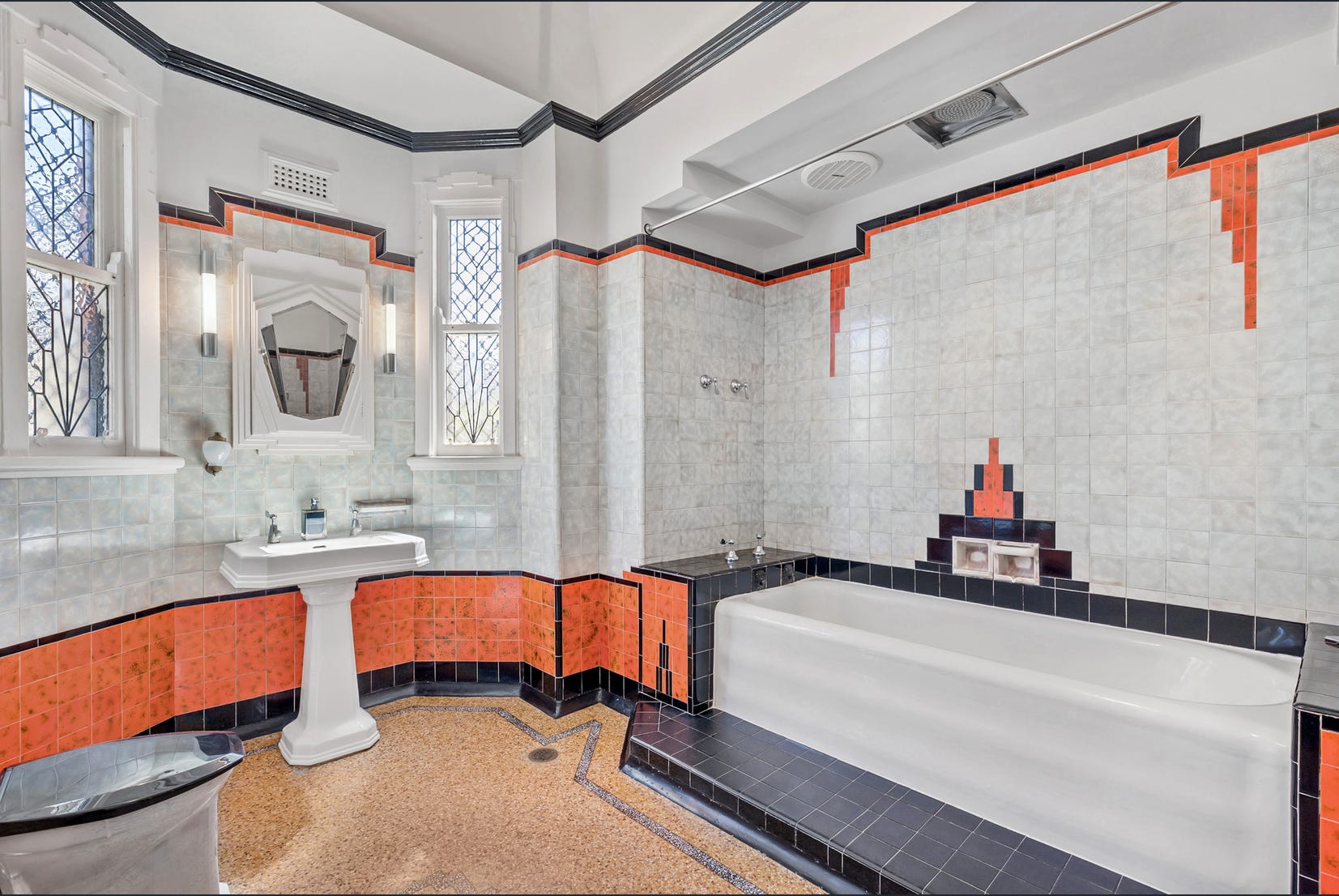 The sunroom, with its large window seat, is situated on the north-eastern corner of the house, and the walls are finished in celotex. The kitchen, 13ft. by 11ft., situated at a central point of the house, is planned on modern and practical lines. The Monel metal sink, with double drainers, is situated centrally in front of the broad triple box frame window. 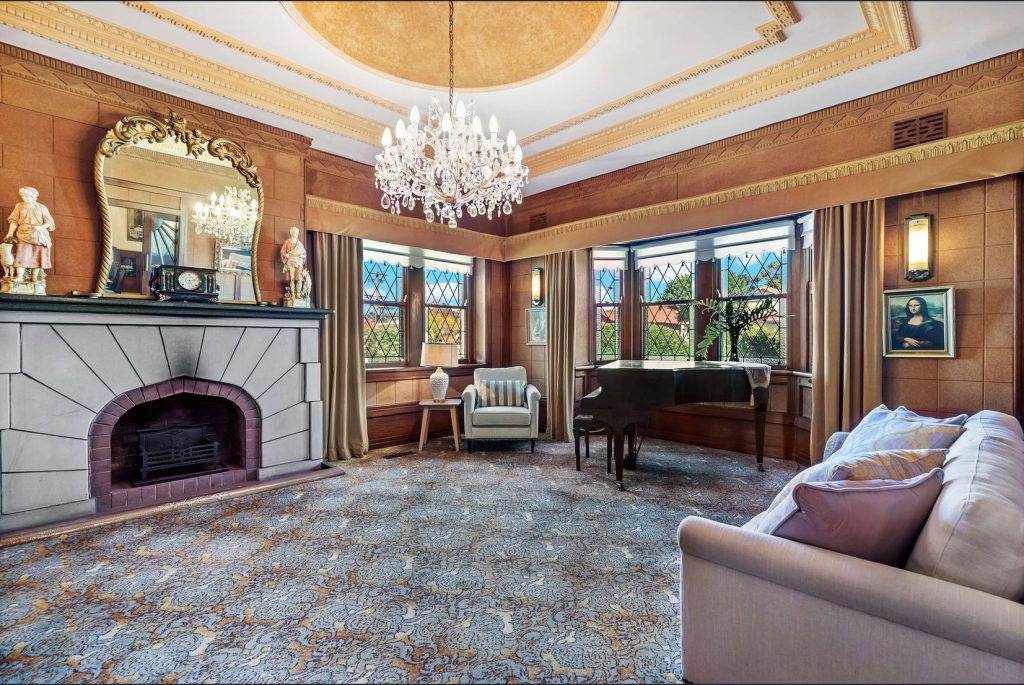 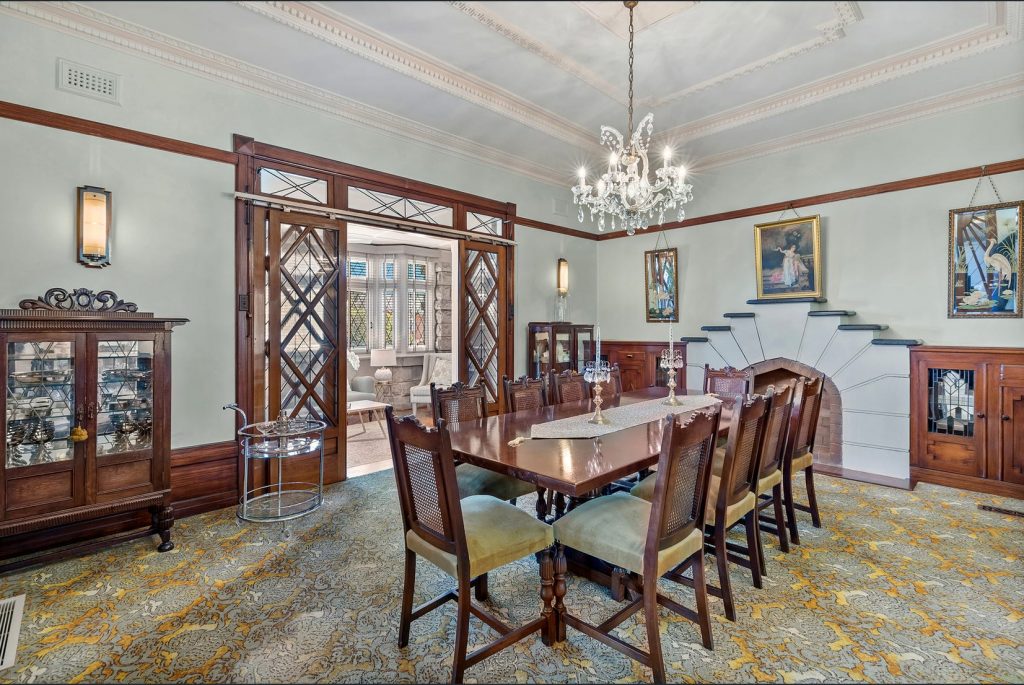 ‘There is a liberal supply of built-in cabinets and drawers. The cabinets are finished in pale green enamel, with black facings, to the same tone as the wall tiles. There is a modern electric stove, double electric refrigerator; automatic electric sink heater, and electric iron cabinet. The laundry, situated near the rear porch, is equipped with porcelain enamel pedestal type washtubs, and electric copper. 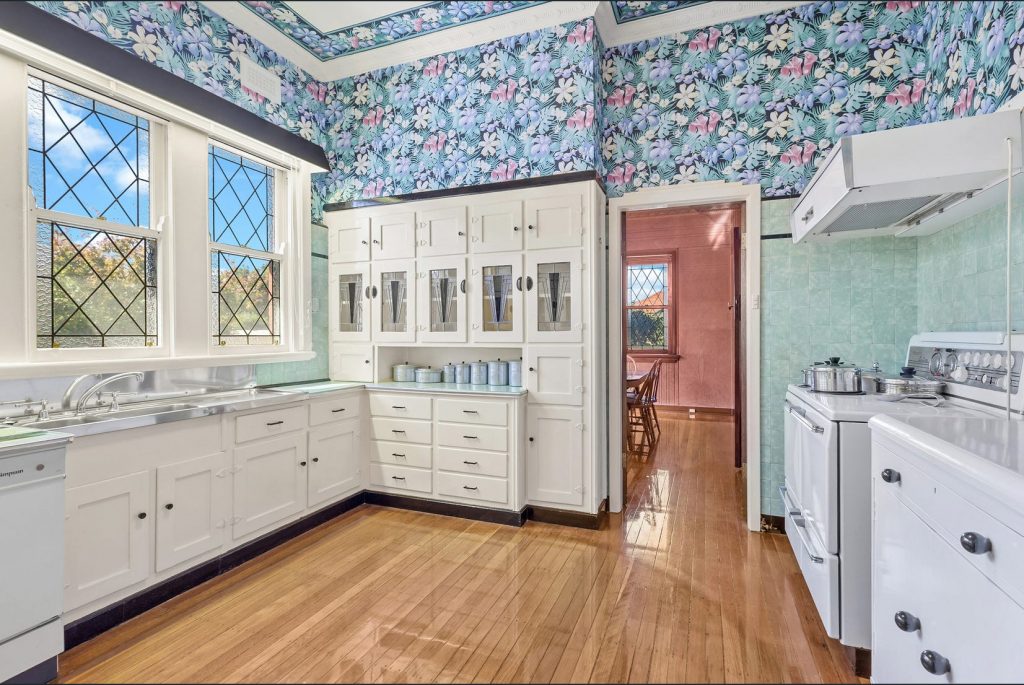 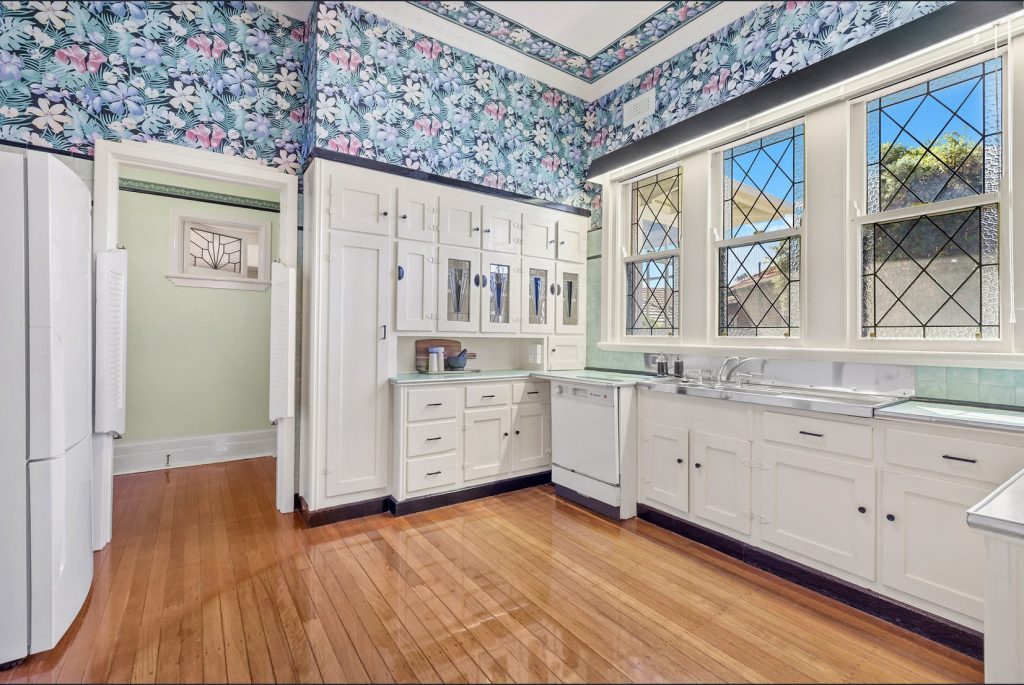 The lighting scheme throughout is modern, planned for correct and harmonious lighting to each individual room. A number of the fittings were specially made for this installation. A number of the rooms are equipped with flush type built-in ceiling boxes of novel design, with the addition of modern wall brackets, and a pair of special two-tone built-in flush type arch clarks illuminate the vestibule and hall, in addition to a pair of distinctive wall brackets.Â

A number of flush fittings are concealed in the overhung eaves operated by two-way switches for illuminating the exterior of the building, in addition to the lantern type verandah lamps. 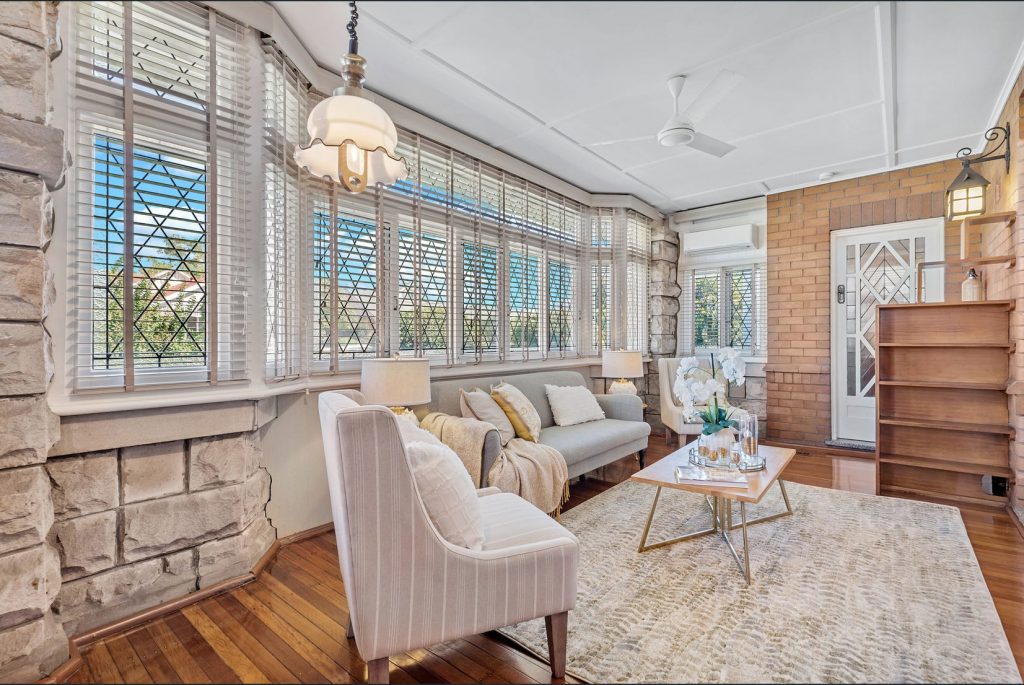 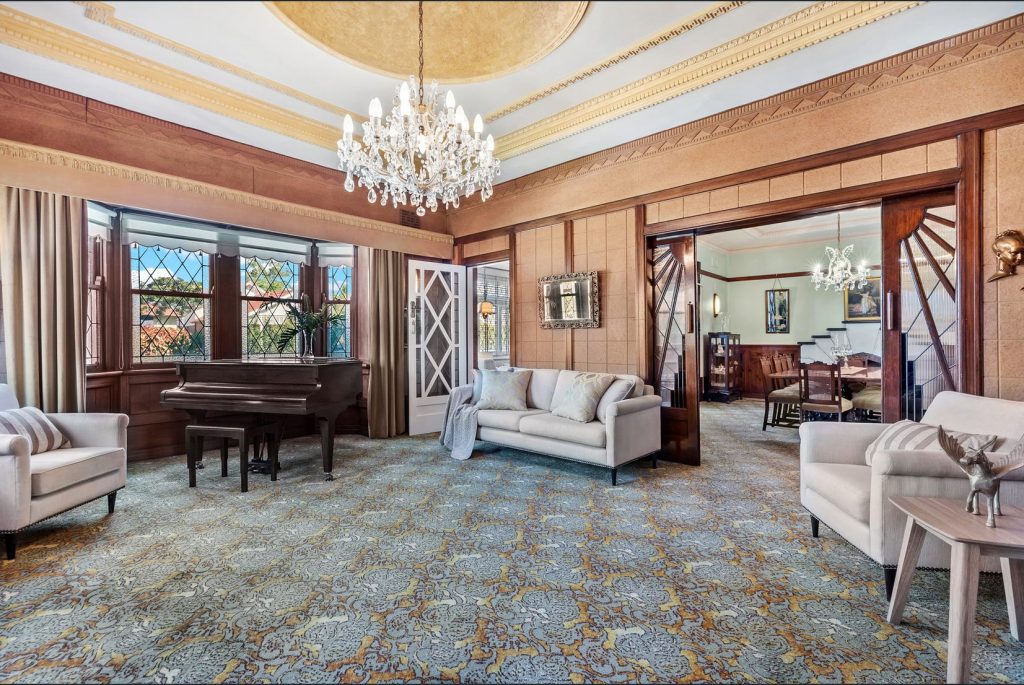 The principal contractor for the building was Mr L. W. Sowerby.