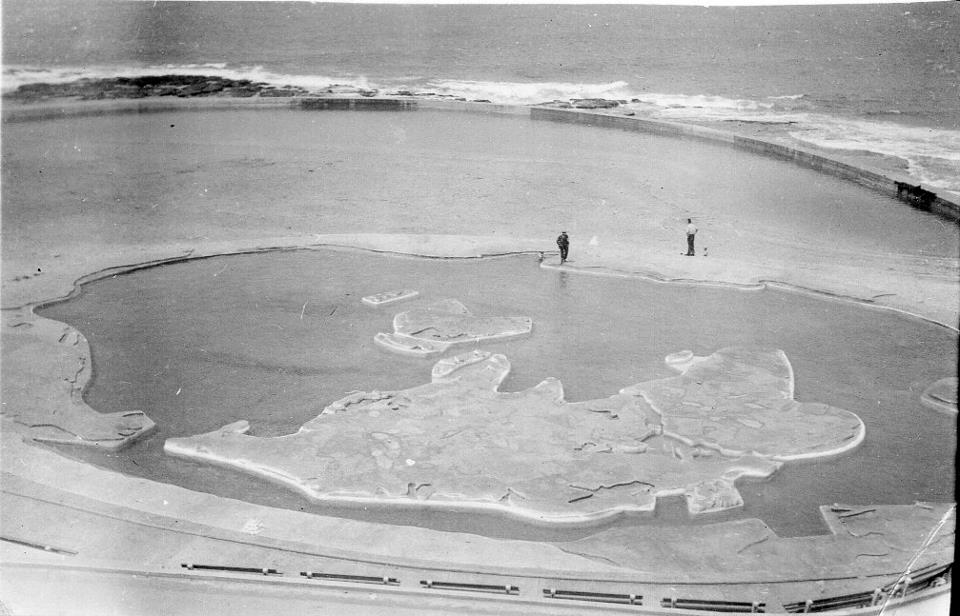 The existence, or not, of the map in the pool has become the stuff of legend.

Many people don’t think it was really ever there. Others argue that they had PERSONALLY ‘jumped off Africa’!

It DID exist but debate still rages today about the fate of the map … is it still there under the sand? Was it removed? What happened to Newcastle’s Young Mariners Pool?

The question of the existence of the ‘map pool’, Young Mariners Pool, canoe pool – whatever – seems to come up regularly.

Many are convinced the map is still there but it was removed by Newcastle City Council decades ago. 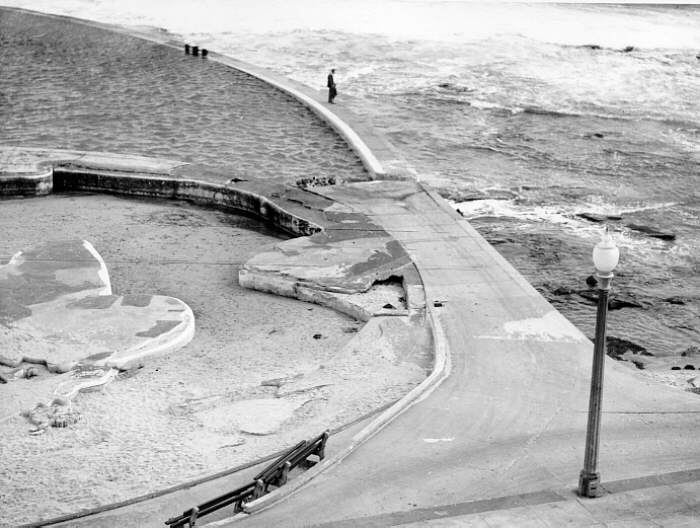 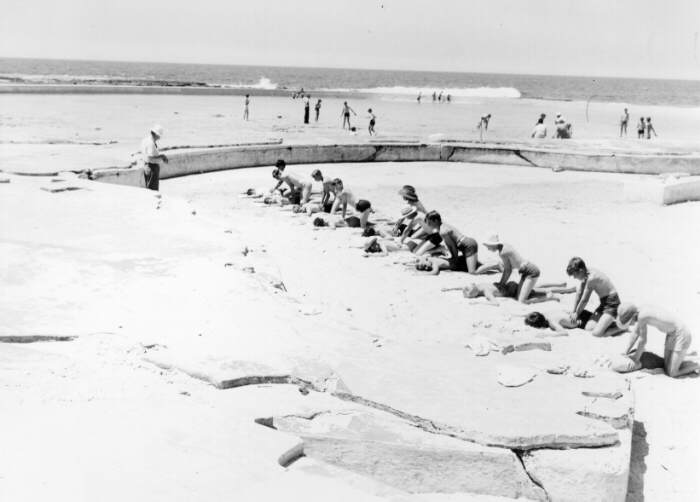 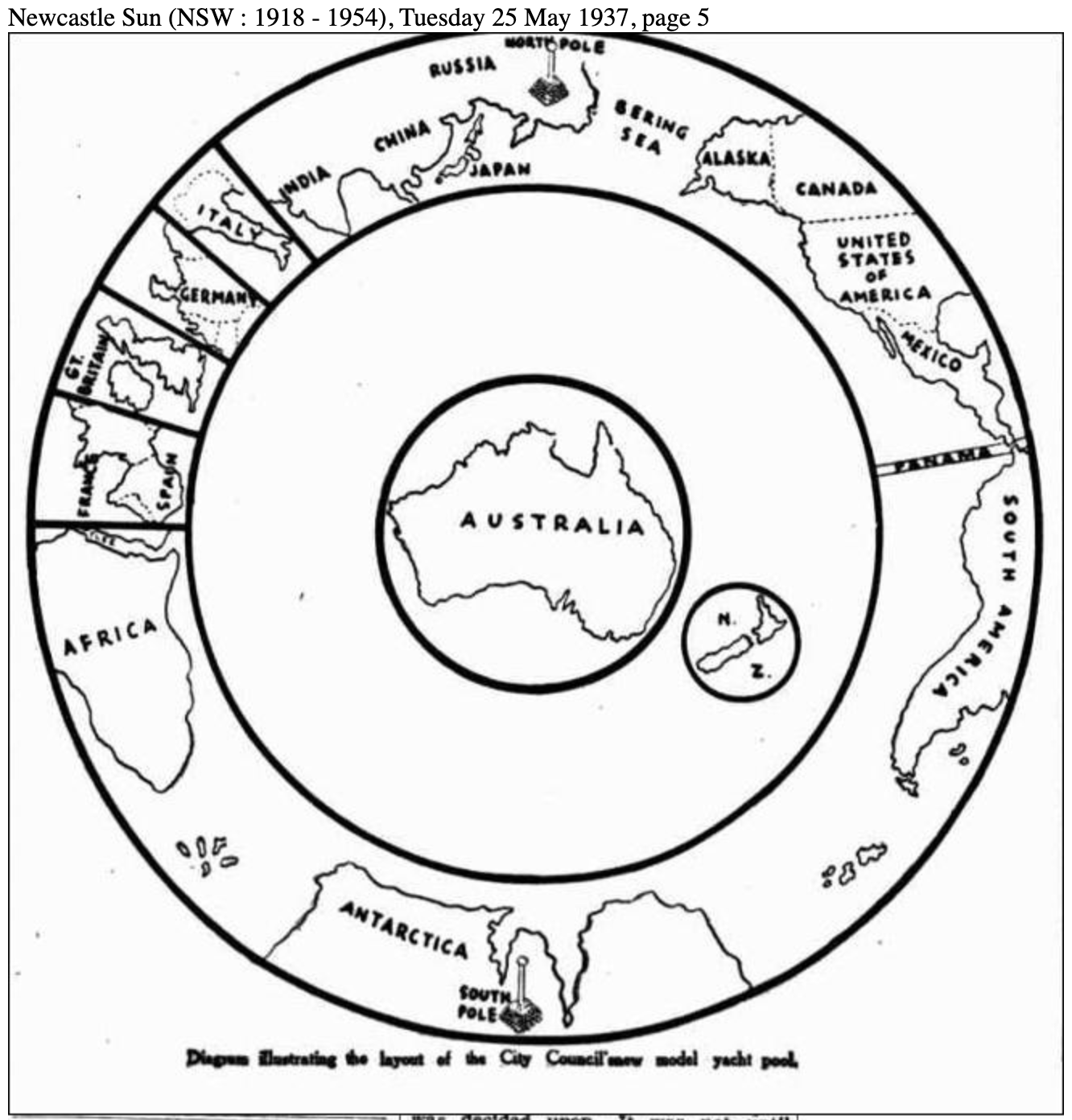 In 1934, it was proposed that a one metre high wall be built on the southern end of the Ocean Baths to protect it from rough seas and from being filled with sand. This area would then be available as a paddling pool for children.

In 1936, a gang of men hollowed out a shallow oval in the rocks, 45 cm deep. The waste material was used to fill a low triangular section of the rocks area between the new pool, the southern wall of the Ocean Baths and the beach promenade. The larger rocks were used to add strength to other concrete walls constructed along the beach. Other types of rocks were used in the rockeries along Watt Street. Later the bottom of the paddling pool would be covered with sand to guard against bruised or cut feet.

In 1937, the Mariners’ Pool was constructed. This pool would later be referred to as the Geographical or Map Pool. This circular pool was 20 metres across, boasting a pigmented cement map of the world on the bottom. Countries, red-dyed for the Commonwealth and the rest green, were about 60cm thick, with 20cm jutting above the water line. 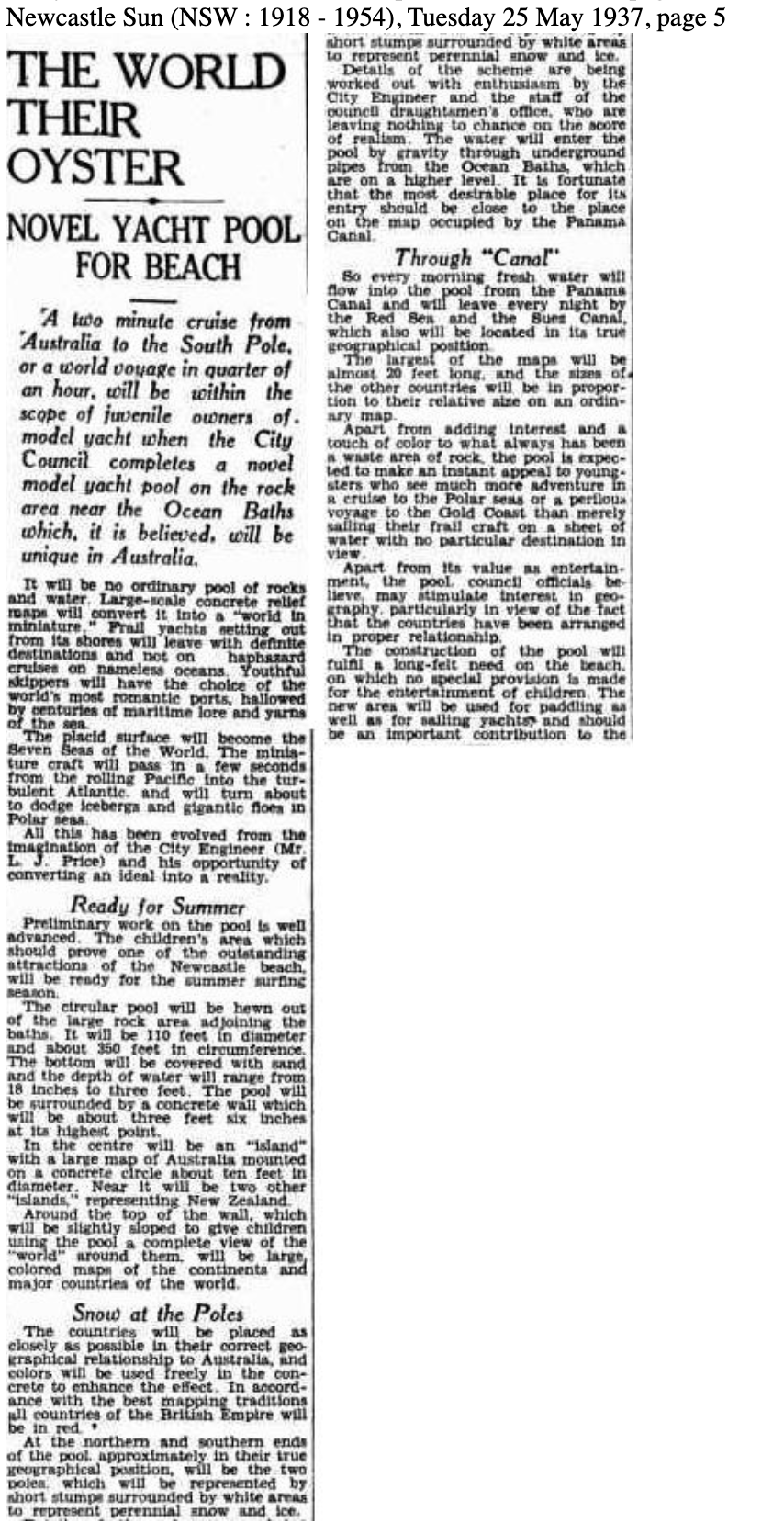 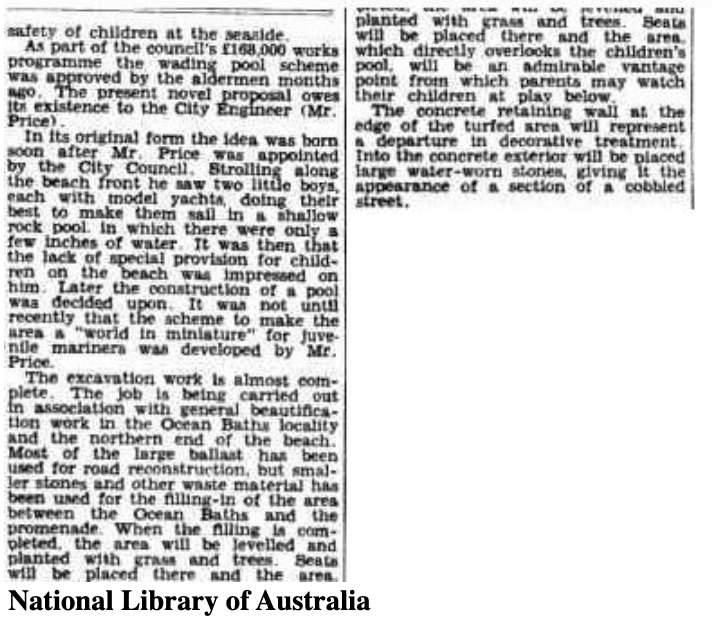 when askedThe Map Pool had such an appeal for the bigger children, as well as the tinier ones for whom it was intended, that it became overcrowded. The City Engineer, Mr. L.J. Price, conceived the idea of building the larger pool to relieve the pressure.

In 1939, a Canoe Pool, for the sailing of canoes, was built beside the Map Pool.

It was constructed in concrete with depth controlled by sluice gates which were 2.4 metres wide and 1.2 metres deep.

The maximum depth therefore, could never be more than 1.2 metres, with the sanding of the pool following closure providing for an effective depth of 1 metre.

The pool was to be filled waves at every high tide and the geographical pool would fill from it with the continuous flow the whole of the time it was in use. The canoe pool was filled by the action of the tide on 8 November 1939 after the sluice gates were closed for the first time.

In late 1939, pumping equipment was installed and a suction line laid to permit fresh salt water to be pumped into the pools when required. On days when the pools were in demand the pumps could be worked continuously.

Peter Walmsley, licencee of the Newcastle Ocean Baths in 1988, and an old school mate of Ben Lexcen, remembered at the age of about six in the 1940s, sailing boats from Australia to the US and back again with the great Australian engineer. He believed the pool began falling into disrepair in the late 1960s.

In 1981, Newcastle City Council Deputy Town Clerk Mr. Keith Swan said years ago the council cleared the sand from the map whenever it became covered.

But then state legislation was enacted preventing removal of sand from beaches. The problem was not removing the sand but keeping it out, it kept coming back with every high sea. In the early 1970s, nature won its longstanding fight to cover the world with sand.

Because the water in the Map Pool would get trapped it was always a bit murky. When health regulations became more stringent the council had to keep the water clean. Pumps were set upÂ to bring fresh water into the pool from the baths. The cost of pumping the water and keeping the sand out of the pool eventually became prohibitive and it was left to the elements.

Newcastle’s former Lord Mayor, Alderman McNaughton, who also swam in the pool as a child, was fairly confident (when asked in 1988) that most of the concrete slabs of countries were removed from the pool years before.

A study in the early eighties into the feasibility of restoring the pool found the cost of maintaining the pool would be prohibitive.